In an era when women are fighting, once again, for our hard-won access to choice, it might seem counterintuitive that the suit—in its most masculine, tailored, gray flannel incarnation—is making a comeback. But come back it did, on female dandies in bow ties at Dolce & Gabbana, girls with cravats at Burberry, twenty-first-century Katharine Hepburns at Givenchy, even the cool kids at Alexander Wang (where a loose gray version, worn over a shiny black vest, served as a hipster-ized version of the three-piece suit).

There’s a well-worn saying that “three is a trend.” But when it’s more of an avalanche, like this season’s parade of suits, it’s clear that some kind of reclamation of power is going on. In this case, that means power in its most literal form—suits with ’40s tailoring or the strong shoulders of an ’80s corporate raider. But worn with a touch of irony, or accessorized with a slice of bare midriff, torso, or leg, a look like this says, “Yes, I can try on these traditional markers of strength, but I won’t change everything about myself in the process.”

In other words, you don’t have to start dressing like a corporate drone. Both traditional and transgressive power looks abound this season. On the trad side, Giorgio Armani, who dressed Hollywood types in softly tailored power suits back in the ’80s, is paying tribute to his legacy with his New Normal collection, which celebrates suiting in all its forms. Meanwhile, some women, Olivia Stren reports, are looking to the boilersuit and its one-and-done appeal as their new power suit. Think of it as the fashion equivalent of having it all.

Of course, shoulder pads and mechanic’s overalls aren’t for everyone, but ruffles, frills, and furbelows can be totems of authority, too. Voluminous-yet-girly looks, some of them by up-and-coming names like Tomo Koizumi and Vaquera, are proof that you can command a room while still looking like a fairy princess. (If you’re not convinced, read Dayna Evans’s story on the art of womanspreading.) This season, power looks like whatever makes you feel most powerful.

There’s a reason some of the chicest women around have long borrowed from the boys. From classic dinner jackets to banker pinstripes, the ease and instant polish a suit offers is unrivaled. Toss in a few unexpected twists, like Burberry’s monogram shirt-and-tie combo or Dolce & Gabbana’s boudoir-inspired finishes, and you’ve got proof yet again that anything they can do…

No shirt, no tie, no problem.

Whether you choose to bare your midriff in a minimalist bandeau à la Cara Delevingne, come undone with a plunging lapel like Kendall Jenner, or leave your trousers at home like daring Tessa Thompson, the season’s soft, no-boardroom-required tailoring is as relaxed as you care to be. 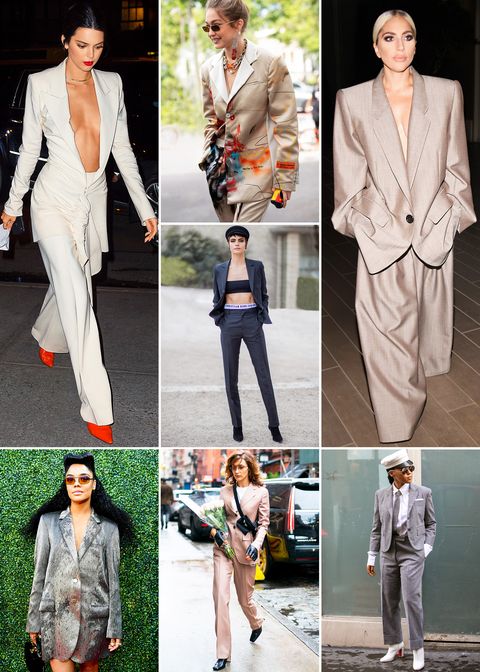