“It’s not veggie again is it? Can’t we have some normal food, please, like lasagne?”

This was the reaction of my 13-year-old daughter, Louisa, said with a teenager’s sigh, when presented with beany enchiladas, a healthy vegetarian recipe from BBC Food.

To be fair to her, beans have featured heavily in recent family suppers.

We’re following the new planetary health diet, or Eat-Lancet diet, devised by 37 scientists around the world to improve our health and save the planet at the same time.

The diet is largely plant-based, although it does allow one serving of red meat, one serving of chicken and two servings of fish per week. Most protein, however, comes from pulses and nuts. Dairy is restricted to a glass of milk a day. Eggs are limited to one-and-a-bit a week. Bread, pasta and rice should be brown, and half our plates should be fruit and veg. Added sugar should be limited.

It doesn’t sound extreme, but for most of us our average meat and dairy intake is far higher. In fact, Europeans would need to eat 77% less red meat and 15 times more nuts and seeds to meet the guidelines.

Our family is not totally typical because my husband, Johnny, is vegetarian, and his veggie stew is a weekly staple. Which is not to say that the kids are fans of said stew. They prefer to eat white pasta and sauce, sausages and chips, burgers and fish fingers.

At school their diet is even worse. School dinners are derided as “gross”, so their average day consists of bacon butties, crisps and mid-morning “pizza” baguettes. After school, snacks might be a white flour English muffin, a bun, toast and jam, or a cake. Plus illicit sweets on the way home.

As for me? I eat a lot of vegetables, but I also partake of meat too often, and, as a cheese, yoghurt and latte lover, my dairy consumption is far higher than the recommended range. Clearly there’s plenty of room for improvement.

Afternoon tea, but no cake

My first mission is to see if I can improve what the girls eat after school. At my local shop I look for healthy snacks. I settle on lightly salted popcorn, brown rice crackers, hummus, seaweed thins, nuts and olives.

I set these out in bowls around the kitchen, ready for the kids’ return.

“Great! Popcorn!” says Josie, 11, as she charges into the kitchen. This snack is a winner as it reminds her of treats at the cinema. She ignores the nuts, doesn’t love the seaweed, but eats the entire bowl of olives and a couple of rice crackers.

For supper I’m making mushroom mince chilli, a recipe from The Food Medic website, which involves processing mushrooms to replace the mince. If you scrunch up your eyes the finished version almost looks like mince. It tastes good too. Everyone eats it a little reluctantly. Afterwards Louisa says: “Can I get a burger at the weekend?”

The next morning, however, she makes her porridge with oat milk, without even being asked. And at school she opts for dried fruit instead of crisps. 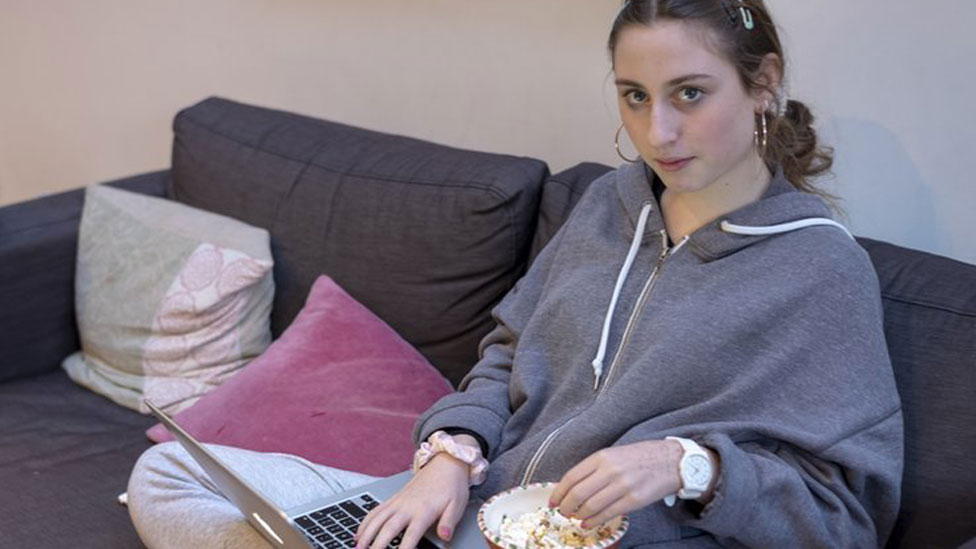 Clearly some elements of the healthy-eating message are sinking in.

That evening I make tofu steaks with ginger and sesame from a recipe by popular Irish veggie chefs The Happy Pear. I’m not a huge tofu fan, but this recipe is delicious, and quick to make.

What do the kids think?

“I’ll eat what I like at school,” says Josie.

Still, their plates are clear, so I’ll take that as a win.

As the family’s bean consumption rises, I’m cutting back on dairy.

I now have coffee with oat milk, a tasty and sustainable substitute. I’m staying away from yoghurt and cheese most of the time, and I feel lighter and brighter, although this could also be a result of my new veg-heavy diet, and less cake.

With the health of the planet in mind I’m also shopping more locally, cooking from my weekly organic veg box, and making sure to buy British meat and fish, where possible.

Our family is a long way from being dedicated followers of the planetary health diet, but focusing on the plan has helped us make some useful healthy changes: we’re eating more fruit and veg and we’ve cut back on red meat, dairy and sugar.

The kids are only sometimes shouting “gross” at the sight of veggie stew.

My husband Johnny, already a veggie, broadly welcomed the diet: “It wasn’t a big hardship for me. But it was interesting that even a veggie might have to give something up under this diet – I’m thinking of the one-egg-and-a-bit-a-week rule. That felt a bit hair shirt.”

Giving her verdict on the diet, Josie described it as: “Interesting and disgusting. It’s bad for a child as they don’t get to eat fatty but nice things every day. But I did like healthier snacks like not sweet popcorn and raisins, and those beany enchiladas were nice. Wholewheat spaghetti is OK.”

For my part, I’ve learnt that life can be lived with less cheese.

I’m determined to continue with the regular veggie suppers, and to keep searching out family friendly recipes.

On the final day of the diet I offer the kids a choice of organic steak or aubergine curry.

It’s no surprise when they choose the steak and enthusiastically wolf it down.

That’s their red meat portion for the week then.

What did they have for lunch at school?

“The diet’s finished right? Sausage and chips,” comes the reply.