Though she’s only 21, Halima Aden has lived a lot of life. Born and raised in a refugee camp in Kenya before moving to the U.S. at age seven, in 2017, Aden became the first mode wearing a hijab to walk a show during New York Fashion Week. Since then she’s become the first model to pose in a burkini in Sports Illustrated and just this week at NYFW she announced she’s partnering with Fashion Week’s new official car sponsor, BMW. Will this be an opportunity for her to be the first person in her family to own a BMW? If Aden has any say in it, she hopes so. In an intimate fire side chat with journalist Noor Tagouri, Aden discussed this and more. 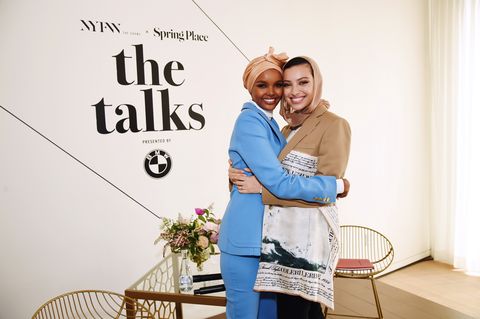 On being a role model

“Being the first, it’s amazing; it’s changed my life, but it also means absolutely nothing if there’s not a second, a third, a fourth. The journey needs to continue, and it’s all about opening the doors so that other people feel like they can walk in. And so for me, I always try to set a good example. Take modeling and IMG for example. They took me on but it wasn’t a matter of assigning the first hijabi. They signed Halima. It’s not about bringing people just to check a [box on a] list. Everybody is an individual at the end of the day.”

On walking away from Yeezy Season 7…then coming back

“Carine Roitfeld was my fairy fashion godmother. My first ever photo shoot was actually for CR Fashion Book‘s cover but then she also put me on the runway. A lot of people don’t realize that at my first initial fitting when I went for Yeezy Season 7, I didn’t get the look because it didn’t fit my personal wardrobe requirement. And so I left thinking, ‘Great, now I can’t even tell my friends,’ because who’s going to believe you, like ‘Oh, I was this close but…’ Nobody’s going to believe that. So I was kind of bummed and then I went back to the hotel thinking, ‘Okay, I’m not going to be able to participate in this show,’ but they called us back. They said, ‘Come back, we have a second look,’ and sure enough it worked. That was so important for my career because it was the first time that I knew I didn’t have to conform, I don’t have to change who I am, and it kind of set the mark for what was to come.”

On posing for Sports Illustrated in a burkini

“It was absolutely necessary for me to do this because it’s not just about, ‘Oh, I’m shooting for a magazine,’ it’s about the social awareness that is spreading and the conversation. That piece was on CBS; it was on every single media outlet, and that’s important because that means so many more people are now being educated on what a burkini is. And a lot of people are saying that it’s beautiful, it’s sexy, it’s modern; there’s nothing wrong with it. If a girl can proudly walk in a bikini, a two-piece, good for her. That’s what makes her feel confident. If I want to wear my burkini and that makes me feel my absolute best, I should proudly wear it. So it’s about that, and then my mum was like, ‘Okay, you still could have posed better, but okay.’ We got the okay.”