It’s estimated more than half the indoor cats in the U.S. are overweight. Above, Miko the cat, aka “Miko Angelo,” is seen before and after participation in a study about feline weight loss. 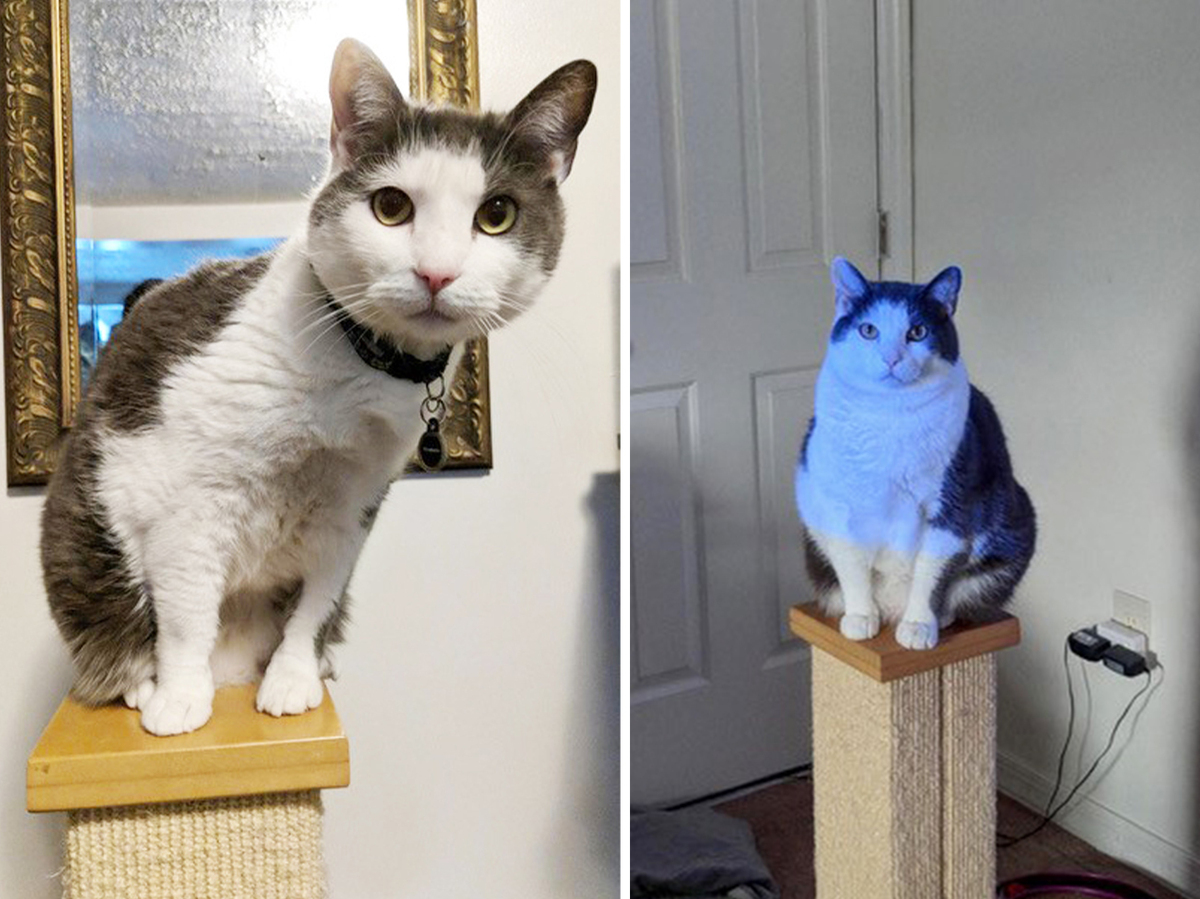 It’s estimated more than half the indoor cats in the U.S. are overweight. Above, Miko the cat, aka “Miko Angelo,” is seen before and after participation in a study about feline weight loss.

It’s dinner time, and the smell of paninis is wafting from the kitchen of their apartment in Blacksburg, Va. It smells delicious, especially to Miko, who takes it as a signal that it’s his mealtime too.

“He is a vacuum eater, which means that he will just inhale his food,” Shibley says.

Shibley knows her cat’s habits. Not just from living with Miko. But because recently, he was part of a year-long study at the Virginia-Maryland College of Veterinary Medicine designed to understand how to to keep indoor cats at a healthy weight.

As part of the study, Shibley, along with Dr. Lauren Dodd, a resident in clinical nutrition at the school, did weekly check-ins on Miko and fed him a special low-calorie diet of high-nutrition food.

Miko was an ideal candidate for the study: no illnesses and a bit chunky.

“We didn’t ration his food,” Rathod says. “It was totally our fault.”

“I used to like, share whatever I was eating with him if he wanted it, which was really bad. And throughout the study, he would come up to me and try to take my food and I felt like a monster because I’d say no,” Shibley says.

Megan Shepherd, a clinical nutrition professor at the veterinary school, has heard all about these kinds of struggles between pet owners and their pets, and knows who usually wins.

“It’s not hard to overfeed them in a ‘food is love’ culture,” Shepherd says.

While, some felines can self-regulate when it comes to food, most indoor cats need help keeping the pounds off. It’s estimated more than half the indoor cats in the U.S. are overweight. The Virginia-Maryland study — that was, yes, sponsored by Purina — tested how best to do that.

It starts with an assessment on the body weight scale. A score of “1” is emaciated, and “9” is obese. “And there are pets that leave the scale,” Shepherd says. “We definitely have pets that become a 9 … plus … plus.”

When Shibley and Rathod brought Miko in for the study, they thought he might be a seven. Turned out he was a nine — a sobering realization.

First change, say the vets: put an end to your cat’s all day snacking. But cat owners know, cats have ways of making their needs heard — wailing all night or jumping on heads, keeping everyone else from sleeping. One cat in the study ate a whole bag of gluten free bread in protest.

“If you have a cat that’s screaming for food and yet we still need to keep those calories restricted,” Shepherd says, try feeding them vegetables. That’s right. One of the big takeaways from the study is that cats will and should eat veggies.

But Dodd says, it’s the connection between pets and their people that’s the biggest factor in successful weight loss.

One woman with a cat in the study decided to diet along with her pet.

We checked in with Miko Angelo a few months later — and his new program is working. “He tends to beg for food” Shibley says, “so he might be doing a little bit worse this week because my little sister is visiting, and she keeps giving him salmon.”

“I gave him like two little bits of salmon and I felt guilty about it! And I was like, I know that he’s doing so good and he’s about to be interviewed and I gave him a treat — he’s so cute, he’s got those big eyes.”

And we all know what that’s like. But for felines and humans, it’s not just about losing the weight, it’s keeping it off.