Despite starring in a show about sex, Sarah Jessica Parker doesn’t often discuss carnality. She’s got other things to do, like make dreamy shoes and get divorced on TV and save her neighborhood from squash robbers. Until now.

That’s thanks to Initimissimi, the Italian lingerie chain smart enough to snare SJP as its main model. At their recent fashion show in Verona, we were super eccitato to speak with the actress about what she’s learned from a career wearing undies on-camera.

“I can tell you how I do it,” she laughs. “Pretend you’re someone else, even just a bigger version of yourself.” Below, SJP narrates six of her biggest moments wearing lingerie on-screen.

“Oh. My. God. Those are “dance trunks,” as we used to say. They would have been made by Danskin or Capezio. I’d been dancing my whole life, ballet mostly, so for sure I owned these things in real life, too. They would have looked a lot like underwear, but they’re okay to be seen—it’s not an embarrassment or an accident. It’s sort of how underwear at the beach is odd but a bikini, which is so similar, is standard. I mean, to me, what’s really crazy in this photo isn’t the underwear. It’s my hair color!” 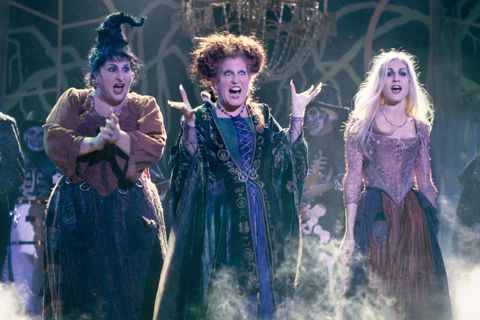 “The Sanderson Sisters! Love them. When I had to fly as a witch, they had me rigged up in a harness and this corset, ready to fly. And sometimes I would just hang out up there in the rigging while the crew reset between takes. Inside this corset are pieces of The New York Times, divided into sections. They fit perfectly because the corset was so boned, it worked like a magazine rack. It was made absolutely properly—spot on as they would have in the 17th Century—so they researched what I would have worn back then. If you’re wearing a corset that’s properly made, it’s comfortable. This one was like being held by nice hands. I would totally recommend wearing a corset, and I do it in one of the Intimissimi ads! So get the good kind… you know, pain isn’t sexy.” 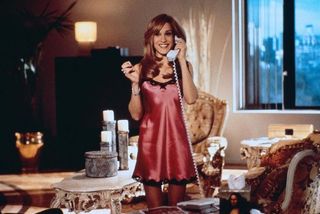 “Oh, she’s wearing a negligee with a push-up bra underneath it, isn’t she? Of course she is. That character is an abominable person! She’s awful! But the costume is not awful, because they didn’t spare any expense on that movie. The quality of that lingerie is exquisite. That is a quality piece—like, fancy. What did I learn from this costume? That I didn’t want to look like this in real life. But the funny thing is, looking at it now, it’s a fairly standard look! You could totally wear her clothes, just don’t act like her. That’s the trick.”

“Oh, I’m fashion roadkill! Those pants were made by William Ivey Long, who is a famous Broadway costume designer. He’s famous for making costumes for all the huge, sparkly dance numbers. One of his tricks is embroidering tiny crystals very delicately in [panty] hose, so the leg shines and catches the light whenever it moves. So I asked him if he would please do that, and personalize these hose for me. The bra is by Dolce & Gabbana, those beautiful balconette bras. The coat and shoes are Dolce, too. But the panties, those are a William Ivey Long original, and since they’re fragile, we had to make a few pairs. Some of them needed to be hanging on the fashion show rack in certain shots, and some I had to wear. 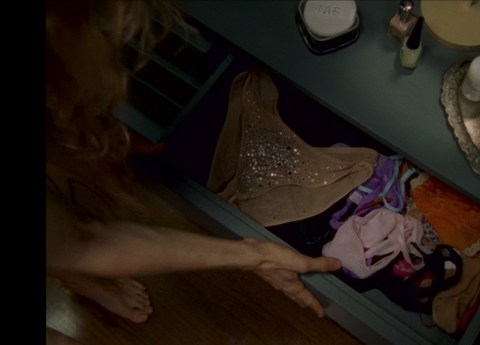 We needed quite a few pairs for me, because I fell quite a few times, and the underwear was too fragile for it. I actually choreographed my own fall, and I was okay! I fall a lot, to be honest. And I happily did it, because I knew that scene would be great. But to be honest, I feel like I fell an endless number of times. Easily a few dozen. We had to shoot me falling in front of [Samantha and Charlotte] in the front row, then me falling with a wider shot of all the rows, then me falling from the photographer’s perspective, from Heidi [Klum] stepping over me! In front of Kevin—we had Kevin Aucoin and Orlando Pita backstage doing hair and makeup. That was towards the end of Kevin’s career. He wasn’t feeling well at all. We had to shoot that fashion show over a few days, and he was laying down between every shot we did. He was very sick but he was also very sweet and he showed up every single day to do the work.” 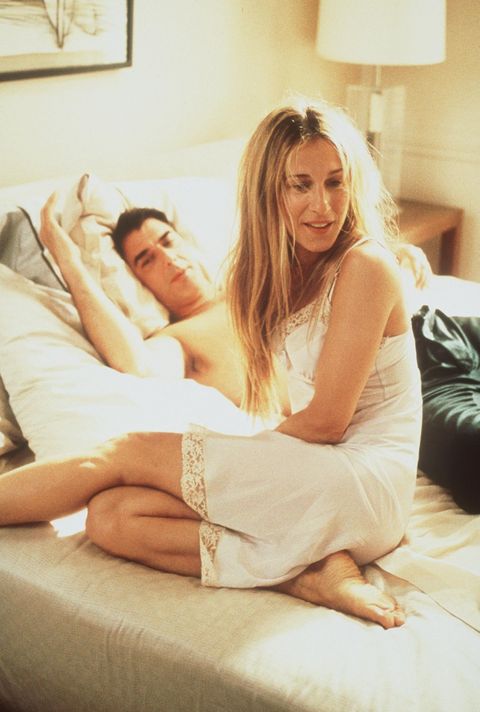 “Patricia Field was one of the first people in the ‘80s to inspire inner-wear-as-outer-wear, whereas other people would be like, “Hide your bra straps!” Pat was very into showing them off. We liked that strategy for Carrie because we feel like she gets dressed for everything, including just going bed with Big. And I liked it because there were other actors on the show who were comfortable and willing and wanting to wear less on camera! And they were so good at it! They looked so great doing it! Meanwhile, I really didn’t want to do it, and Carrie had a look for every occasion, even bed, so it worked out. That’s old thrift store lingerie, and I’m wearing an underwear and bra underneath it. The slip is actually pale blue, not cream, but our lights changed it. I think it’s fun to see all the layers. It’s sweet.” 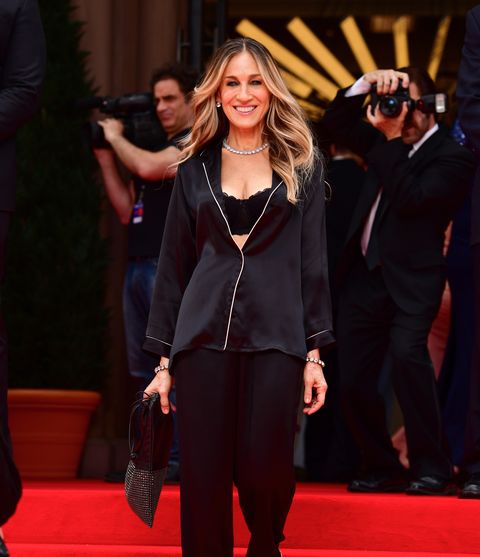 “That’s the West Village of New York City. We always shoot close to home, which is really pleasant. So the thing with this brand is that they make it seem perfectly reasonable to wear pajamas with heels, or wear a bra with a blazer. They just make it seem great! But I don’t know if I have the same courage as the version of me that I’m playing in this commercial. You know? I always feel more courageous when I’m working. You create a character or a tableau and it’s easier. In real life, could I pull this off? I personally don’t know! It really scared me to try. But the beauty of it is, I got to do it, and I did it! Phew!”